What began as a one-man mission to help himself and his fellow Tanzanians get better working conditions soon transformed into something much bigger than himself. Amani Afrika was established in 2007 by Godwin Temba, a fearless young lad looking for a chance at life, but despaired at the prospects that were readily available. Godwin started his career in tourism as a porter, before elevating himself to become a guide. Employment opportunities were not easy to come by. Godwin took whatever job he was able get, so he could take home his daily bread—ugali dagaa (cornmeal and anchovies, a staple of Tanzania), that is. But soon, he realized that there had to be something better than just working for the sake of working, and agreeing to whatever conditions that were being handed down. Tourism in Tanzania was dominated by a few large players with connections to overseas travel agents then. There was a real disconnect between the travellers and the workers on-the-ground. The travellers who paid thousands of dollars to their travel agents had no awareness of the actual working conditions borne by the smiling Tanzanians. The agents had no incentive to ameliorate the situation. The large players had total control of the Africa travel landscape since access to Africa was limited before online communication flourished. Now, the power is handed to the conscious travellers who have the ability to choose which travel company they wish to go with. The advent of internet has enabled travellers to directly shop for travel services online by skipping the middlemen. Social responsibility and sustainable practices have increasingly become hot attributes to look for in a safari outfitter. There was no such luxury then, before Godwin founded Amani Afrika.

Godwin saw it a need, not an option, to create his own company, so he could do things “the right way” according to how he saw fit. He garnered the support of his co-workers and the volunteers he met in Arusha, when he decided to give this venture a go. It was not an easy decision, as ugali dagaa cost 50 cents but a tour operator license cost 2000 U.S. Dollars (years of savings, according to the going wage scale), but that did not deter Godwin, who had his mind set on making a difference—perhaps more so because it was not just a difference to himself, but to those who stood by him and leaned on his strength to go on. Amani Afrika was born.

Godwin counts it his blessing to have embarked on this journey, as it led him to his wife, Vivian, a Canadian who was also not ready to settle for an ordinary life, after having lived in different continents—the most recent, Australia, where she was recruited by her friends to climb Kilimanjaro. It was a life-changing experience in more ways than one.

View Our Portfolio of Trip Designs

Tanzania is where Godwin and Vivian decided to make their home, to realize their dreams, and to raise their young family. Together, Godwin and Vivian built Amani Afrika to become the specialist boutique travel company that it is today, catering for discerning travellers in pursuit of authentic travel experiences. Amani Afrika’s clients are a special bunch who highly value the duo’s in-country expertise, multicultural backgrounds and most of all, their honest advice. They have intimate knowledge of the vast country and the extended East Africa region that they proudly call home, in breadths and depths that travel agents who could only manage a visit once a year cannot muster. It is their love for Tanzania and their wealth of experience that shaped Amani Afrika to be that beloved local tour company cherished by people who understand the value of bespoke travel and are not ready to compromise for anything less. 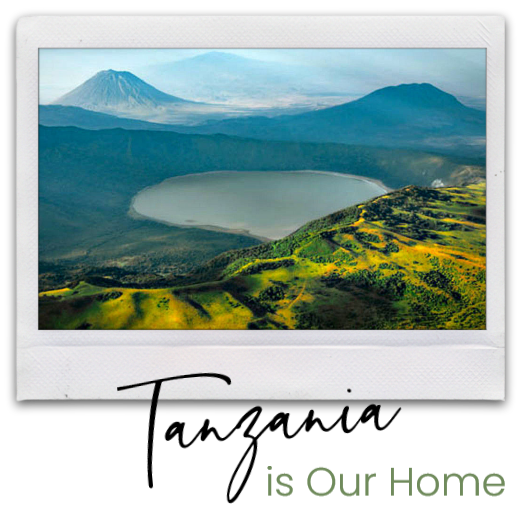 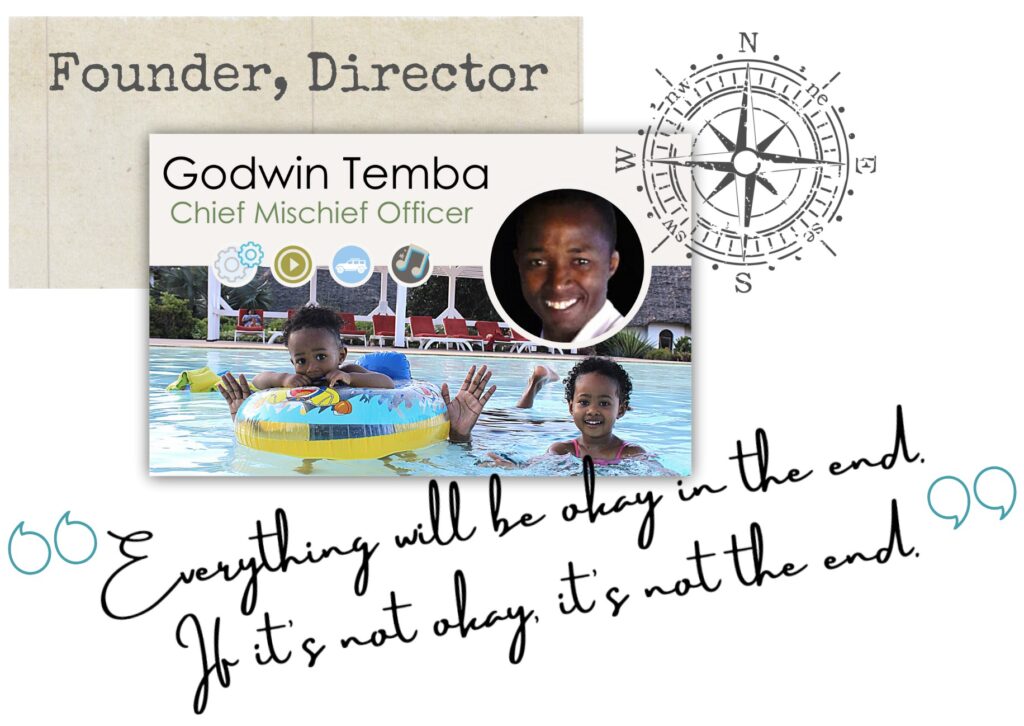 Entrepreneur by day. Batman by night.

Being the director of Amani Afrika is one job; being a Daddy to energetic, cute little rascals is quite another! Godwin is in charge of all things “operations” for Amani Afrika—from assembling a stellar team of mountain guides and safari guides, to making sure that the Land Cruisers are eating and drinking healthily, to offering unique insights to support Vivian when she needed (and not needed) them.

Godwin loves distance running and farming. The “veggie garden” has now become a small farm with cows, goats and chickens—and if given the chance, he would add some donkeys, pigs, ducks and sheep too. Godwin has such a positive outlook on life that it is highly infectious. One only needs to spend a few minutes with him to be ensconced in his aura. 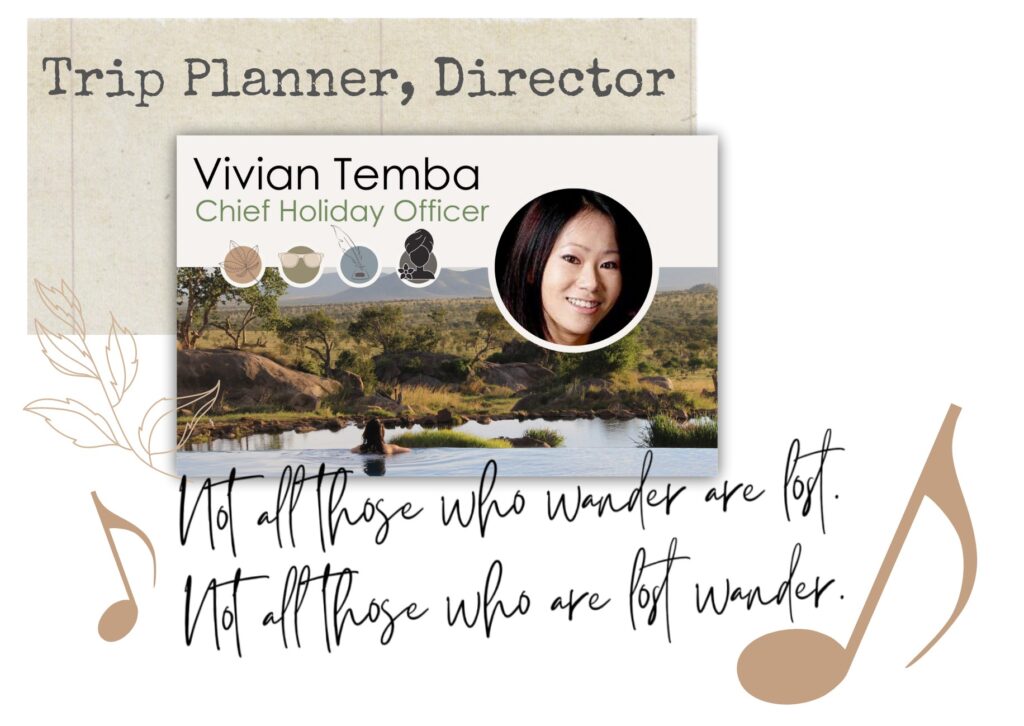 Being the Chief Holiday Officer (CHO) of Amani Afrika is no small job. It is a hard-won title that Vivian has earned after many safari trips and “site inspections” (ahem) at different luxury camps and lodges. As someone who has lived in Hong Kong, Canada, the U.S. and Australia before settling in Tanzania, Vivian genuinely understands the nuanced needs and preferences of overseas travellers from the East and the West, and brings a local perspective to the table, when she crafts each of the tailor-made travel plans for her clients. As an engineer and data specialist by trade, Vivian applies the same rigour and principles from devising algorithms to designing itineraries—meticulous, practical and conscientious— only with more passion!

Vivian loves travelling, dancing—and food! Entice her with delicious offerings and she would happily work for you.

Amani Afrika means “Peace for Africa” in Swahili. Peace to us means amity and harmony. While we treat you with courtesy and utmost respect as our clients, we also treat you as our family and friends, with a warmth and friendship that extend beyond a standard agent-client relationship. As a reputable company in the industry with over 13 years of experience, we have established a set of core values that reflect our beliefs. These values are manifested in our company culture and the approaches we use to serve our customers and work with our staff. They are our guiding principles that helped us garner consistent praise over the years.

We strive to give you our honest opinions and helpful advice so you can make an informed decision regarding your travel plans. We do this by presenting the information as clearly and transparently as possible.

We always treat our clients and staff with respect and thoughtfulness. We do not cut corners or take shortcuts with our approaches. We aim to provide you with the best value, not the cheapest trip you can get.

We deliver what we say we would, and do not make empty promises. We do not condone negative behaviours. We always put in 100% of our efforts. If we make mistakes—since we err as humans—we take ownership.

We are passionate about our job to make you happy, and it shows. We all come from different backgrounds and cultures, but we work on the principles of a shared common ground. We are here to help you.

We operate all the private tours in Northern Tanzania ourselves, and do not outsource our services. We make every effort to vet our service providers to ensure that you will have a trip of the highest standards.

We prioritize your safety. We adhere to health and safety protocols. We supply oxygen kits on every Kili trek, employ experienced mountain guides and safari guides, and maintain our fleet of 4x4 Land Cruisers.

We respect the natural and cultural values of our environment and people. We respect the habitat of our wildlife. We are a 100% locally owned company committed to investing in the local community and economy.

We contribute a portion of our proceeds to the Lemugur community of which we are a part. We support and advocate for social justice causes by raising awareness and educating our staff, community and clients where we can.

Amani Afrika is a family-run local tour operator based in Arusha, Tanzania. We offer a personalized approach to those looking for a fully-integrated solution for their travels in East Africa. We design experiences that are not readily available off the rack.

We are blessed to find ourselves living in Arusha—the gateway to the Northern Tanzania safari circuit, with numerous UNESCO World Heritage Sites at our door. Whenever we can, we travel to the places we recommend to our clients to keep ourselves up-to-date with the destinations and to make sure that the accommodations are up to our standards.
Here’s a glimpse of how we work and play!

Let Us Take You There!

This website uses cookies to improve your experience while you navigate through the website. Out of these, the cookies that are categorized as necessary are stored on your browser as they are essential for the working of basic functionalities of the website. We also use third-party cookies that help us analyze and understand how you use this website. These cookies will be stored in your browser only with your consent. You also have the option to opt-out of these cookies. But opting out of some of these cookies may affect your browsing experience.
Necessary Always Enabled
Necessary cookies are absolutely essential for the website to function properly. This category only includes cookies that ensures basic functionalities and security features of the website. These cookies do not store any personal information.
Non-necessary
Any cookies that may not be particularly necessary for the website to function and is used specifically to collect user personal data via analytics, ads, other embedded contents are termed as non-necessary cookies. It is mandatory to procure user consent prior to running these cookies on your website.
SAVE & ACCEPT

You don't have permission to register